COMPANY HISTORY
Martin F. Christensen immigrated to the United States from Denmark in 1867 and settled in Akron, Ohio, 13 years later. In 1899, at the age of 50, he invented a machine that was capable of producing a perfectly round steel ball bearing. It was a short leap from creating that machine to one that could produce marbles. In 1905, he obtained a patent for a mechanized marble-making machine, for which he had applied in 1902.

In 1903, M.F. Christensen joined his son, Charles Frederick, in founding the M.F. Christensen and Son Company. They established the factory in the 400 block of Exchange Street in Akron. Harry Heinzelman, formerly of the Navarre Glass Marble and Specialty Company, was hired as the company's glass master. It is also known that glass formulae were purchased from J.H. Leighton, which would explain Christensen's use of oxblood (a dark red glass with black filaments), which was used in many of Leighton's marbles.

Due to the success of his invention, Christensen's company shifted the focus of marble manufacture from Germany to the United States. The company's sales were also probably aided by the onset of World War I, which effectively halted the import of German handmade marbles into the country. 1914 was Christensen's peak year of production. Unfortunately, Martin Christensen died during dinner a year later; the same fate was suffered by his son Charles in 1922, only seven years after that incident. Though Charles had assumed control of the company following his father's death, the M.F. Christensen and Son Company was out of business by 1921. By this time, the Akro Agate company was already ascending to its greatest heights; this company was co-founded by Horace Hill, Christensen's bookkeeper, who earlier had embezzled money from Christensen and also taken some glass recipes and plans for marble machinery, which then helped Akro Agate produce their own marbles after several years of simply buying marbles from the M.F. Christensen and Son Company and then selling them in Akro packaging.
IDENTIFICATION TIPS
The earliest M.F. Christensen marbles were "transitionals," as they were gathered by hand on a punty and hand-fed into the rounding mechanism. This procedure left a tell-tale "pontil" on one pole of the marble. These pontils were later eliminated, due to refinements in the glass temperature, as well as timing, and perhaps even owing to improvements in the machinery. However, most M.F. Christensen marbles have a diagnostic trait known as the "nine and tail." Basically, as the glass was twisted from the furnace a nine-shaped spiral (sometimes inverted) was left on one pole of the marble. Often, this "nine" exhibits a "tail" that spirals around the marble and either ends at the opposite pole or terminates somewhere in between, even occasonally looping back to the point of origin. Quite often, where this "tail" ends, there is a small cut-off line, which is evidenced by a usually faint straight line in the glass. Sometimes this crimp may be felt with the fingernail.
All M.F. Christensen marbles were single-stream, and the glass for each batch was mixed in one furnace pot. This restricted manufacture to single-color opaque and two-color slag and swirl marbles.

SLAGS
Most M.F. Christensen marbles seem to have been slags, which are easily identified as having originated from this company because they normally have a "nine and tail" which was formed when the glass was twisted from the furnace. Opposite the "nine" a cut-off line can often be seen, too. As mentioned, earlier examples may have single pontils, which were typically melted in the finishing process. Slags were called National Onyx by the company and were available in such colors as amber, purple, blue, green, clear, aqua, yellow, orange, and lavender, in approximate increasing order of rarity. This company did not produce red slags as earlier thought. Very dark blue slags were coined "Royal Blues." Some slags were produced in very large (over 1 1/2") sizes.

Some National Onyxes, which are probably early types, are referred to as "horizontal slags." These are easily recognized, as instead of having a single "nine" swirl the white spirals multiple times around the marble, forming a tight corkscrew pattern. These are valued much more highly than regular slags. There was one additional type of slag marble produced by M.F. Christensen. These are oxblood slags (possibly called "moss agates" by the company), which have a very dark transparent green base and an oxblood swirl. These are uncommon.

OPAQUES
M.F. Christensen produced limited numbers of opaques, distinguishable by the often faint "nine" visible in the glass. Colors included green (Oriental Jade), light green (Imperial Jade), light blue (Persion Turquoise), yellow, and lavender. The latter are reported to have been restricted to a single run of 45,000 specimens, though all M.F. Christensen opaques are rare.

BRICKS
Perhaps the most collectible of the M.F. Christensen marbles are "bricks," called American Cornelians by the company. These contain the very attractive oxblood glass along with opaque white, opaque black, or translucent green swirls. Some with blue are also known to exist, but are extremely rare. Many bricks manifest the "nine" pattern, with an accompanying cut-off line. There is a lot of variety in bricks, and many are stunning.

One word of warning about bricks is that many of those that seem to be in "mint" condition are, upon closer scrutiny, either recooked or polished. Recooked, or remelted, specimens are those that have been repaired by bringing the surface temperature of the marble to a high enough point that any damage simply melts back into the marble. Polished ones often exhibit tiny pits where trapped air bubbles were exposed as the surface glass was stripped away. These also frequently appear dull, without many of the black filaments that make oxblood really appear like dried blood.

PERSION OXBLOODS
The Persion Oxblood marble is an extremely rare variety that is sort of a cross between a light blue opaque (Persion Turquoise) and a brick (American Cornelian), as oxblood is swirled throughout a light opaque blue base to create a truly spectacular marble.
M.F. CHRISTENSEN GALLERY
(Hover your mouse or lightly touch the image to see the type of marble. Click to view the full size image) 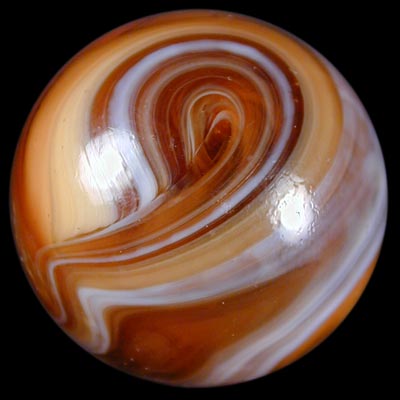 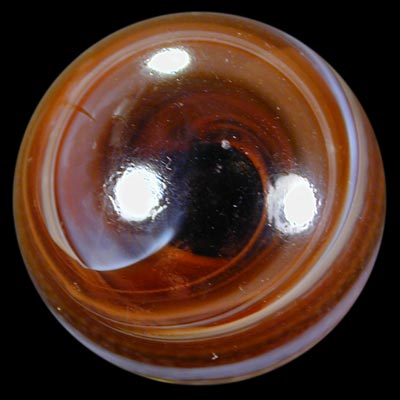 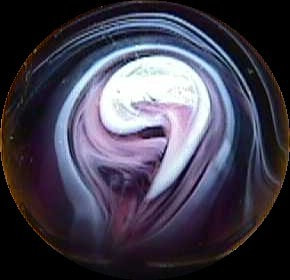 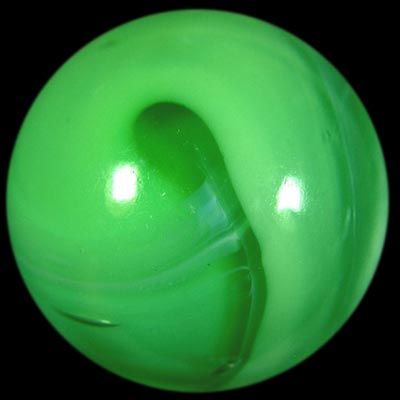 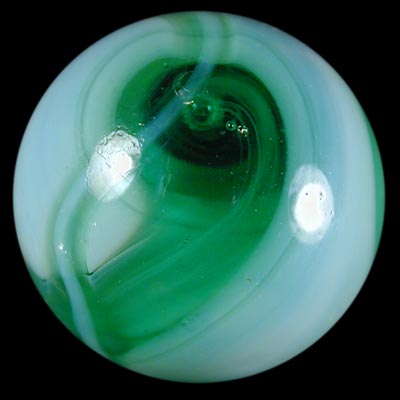 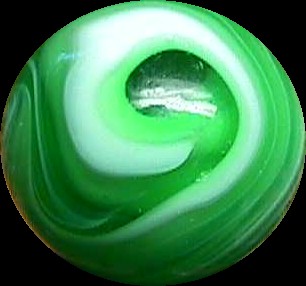 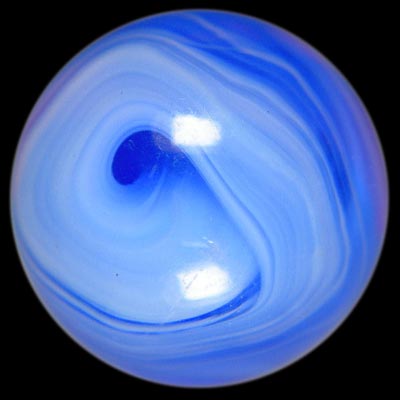 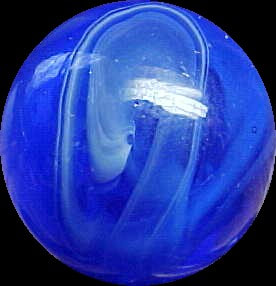 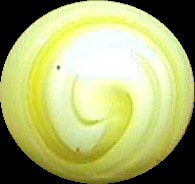 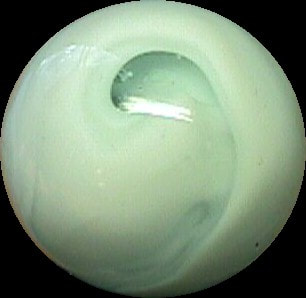 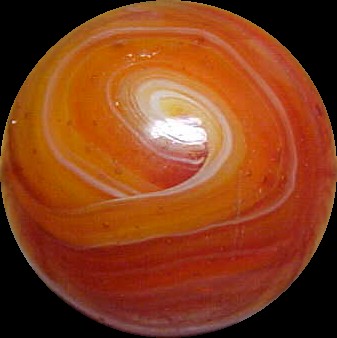 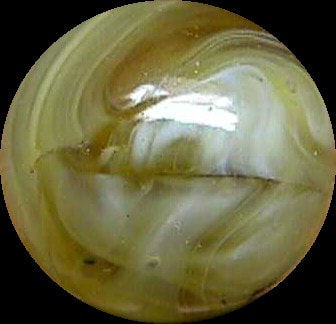 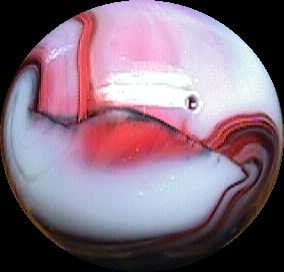 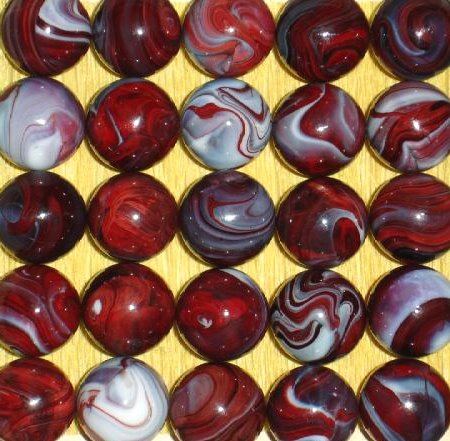 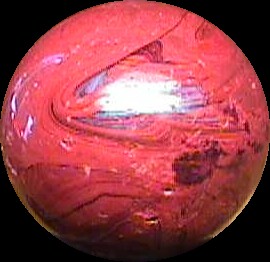 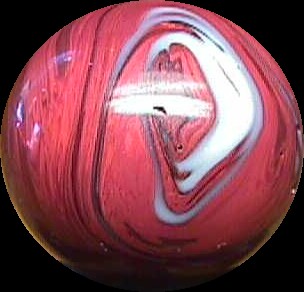 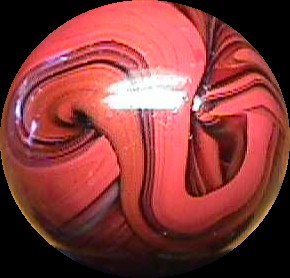 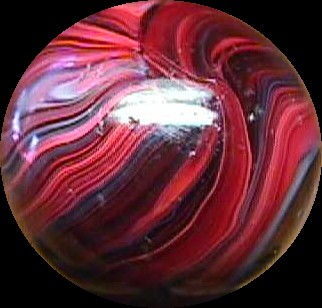 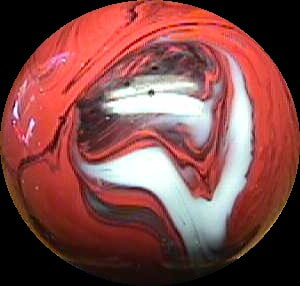 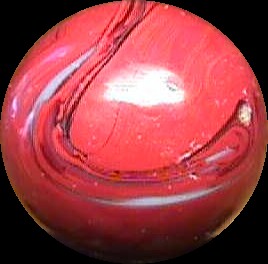 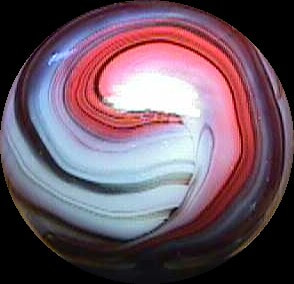 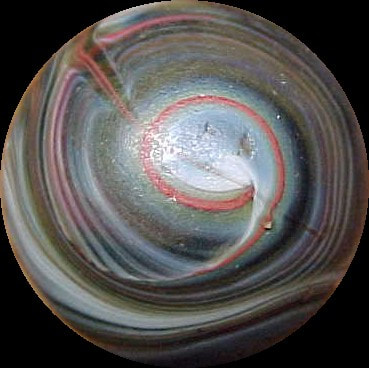 Green Brick
BACK TO MARBLE ALAN HOME
Copyright © 2021    Buymarbles.com
Marble Alan's website is hosted with permission of the A. Basinet family. Any other reproduction is unauthorized.