COMPANY HISTORY
The Champion Agate Company traces its roots back to 1938. At this time it was founded in Pennsboro, West Virginia, by Yucca Jones and Ralph Michels; over the years ownership passed through the hands of several members of the Michels family.

Champion's machines were made by Yucca Jones. At first, the company produced only game marbles (opaque Chinese checkers and "clearies"). Soon, however, opaque and transparent swirls, as well as opaque patches, were added to the line-up. In the mid-1970s production ceased of all types of marbles with the exception of Chinese checkers. However, from time to time Champion has produced limited numbers of swirl types, beginning with the red, white, and blue swirl in 1976 that was the company's contribution to the "Bicentennial Special Pack," a package of marbles containing examples from most of the companies still operating at that time.
Champion revived two old styles in 1983 and 1984, the "Whirlwind" and "Old Fashioned." Other types appeared in subsequent years, perhaps most prominently the "Furnace" or "Special Run" marbles of 1994.
IDENTIFICATION TIPS
Almost all identifiable Champion marbles are swirls, though the company also produced the ubiquitous Chinese Checkers marbles that are indistinguishable from those manufactured by other companies. They do not seem to have made many shooter-sized marbles and almost all are around 5/8".

PRE-1970S SWIRLS
Swirl marbles were part of Champion's regular run from 1938 up into the early to middle 1970s. Most of these appear to have been opaque white-based. On these marbles there is usually only one color in addition to the white, with swirl patterns forming ribbons that fill little of the base glass, as opposed to the swirls by many other companies that cover the majority of the white. Transparent-based and translucent-based swirls were also manufactured, but for the most part these seem to have been made later in the company's history. For the most part, early Champion swirls are difficult to distinguish from swirls by other companies unless found in original packaging.

1970S SWIRLS
As mentioned, sometime during the first half of the 1970s Champion ceased production of its swirls and switched to manufacturing only game marbles. However, from time to time they did produce limited runs of swirls. The first of these was probably a type manufactured in 1975-1976 for the Bicentennial marble bags, which contained a mixture of different marbles made by American companies in operation at that time. The Champion bicentennial swirl had a white-base with an often intricate swirling of red and blue. These marbles are not common today and while not necessarily valued highly in terms of their monetary value are still very desirable to collectors because of their beauty. Another Champion swirl that may have been produced around the same time is the ketchup and mustard swirl. This marble is completely covered by yellow and red swirls.

1980S SWIRLS
In the 1980s, Champion produced another limited run of swirl marbles. These are known as 'New Old Fashioned' swirls. There seems to be two types of these. One type includes shooter-sized swirls that are often multicolored and very attractive. These can easily be mistaken for older swirls by less experienced collectors. They are easy to spot, however, because they often have a very shiny, almost oily, surface, and because they frequently possess crimp marks.

The other type of Champion swirl that I believe is from this decade is smaller like their older swirls and is color-based (most often brown), either with transparent or opaque swirls. Some of these marbles are quite nice and may even have "electric" swirls.

1990S SWIRLS
Around 1994, Champion Agate produced a style of swirl that has become highly collectible and which for the most part is very rare. Considering the recent vintage of the marble, certain color combinations have fetched nearly $100 for a single marble! Their rarity owes to two factors. First, they were made in very limited numbers and never distributed to the general public. Second, they were made of a glass that easily fractures and therefore mint examples are hard to obtain.

These swirls are usually called "Furnace" marbles. They all possess a transparent base with opaque to transparent swirls, usually of several different colors. Sometimes the colors are highlighted with other colors and the effect is dazzling. The story goes that Champion Agate's glass furnaces were scraped, and the resulting residue was made into these marbles. Unfortunately, as noted, the glass tends to fracture, and examples with no fractures are rare. Based on my own observations of these marbles, I have identified at least 14 different color combinations.
CHAMPION GALLERY
(Hover your mouse or lightly touch the image to see the type of marble. Click to view the full size image) 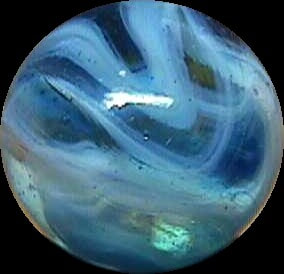 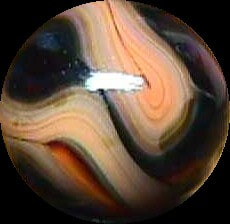 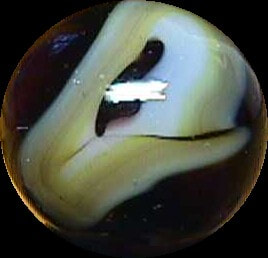 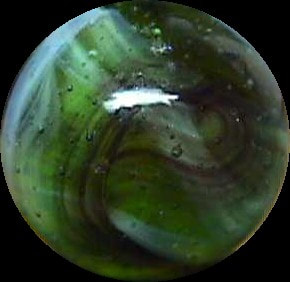 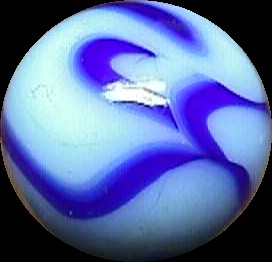 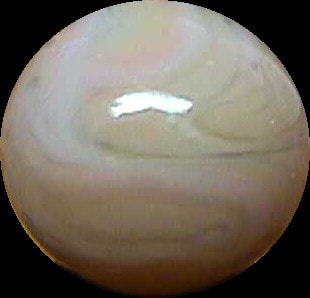 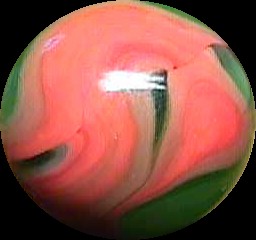 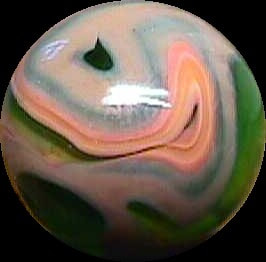 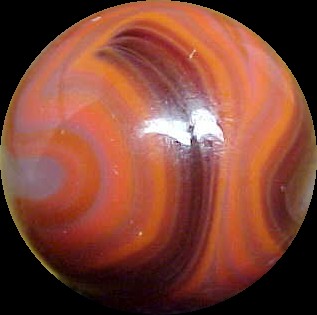 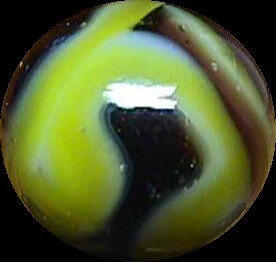 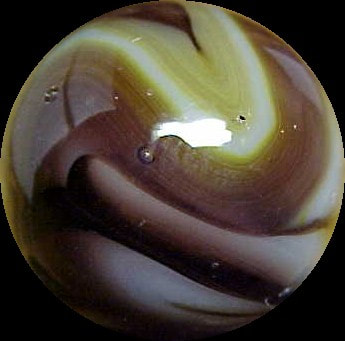 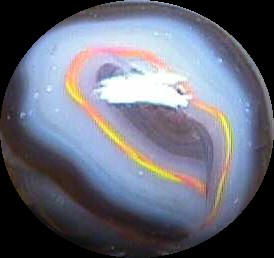 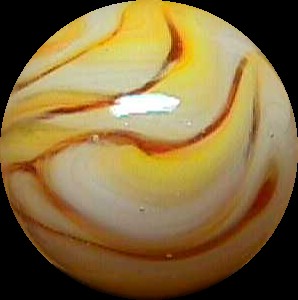 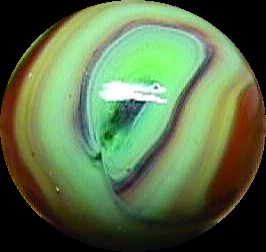 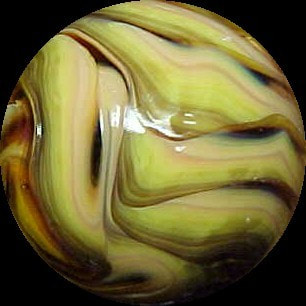 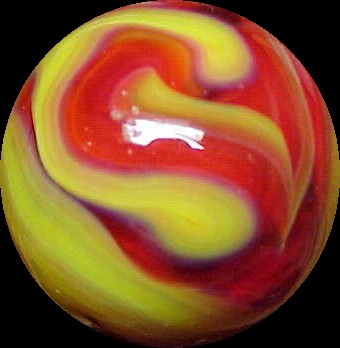 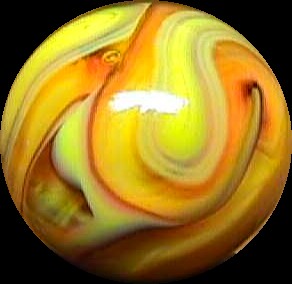 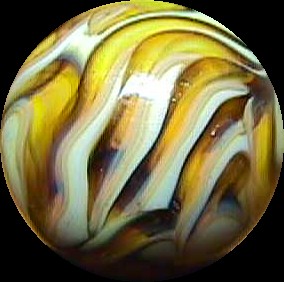 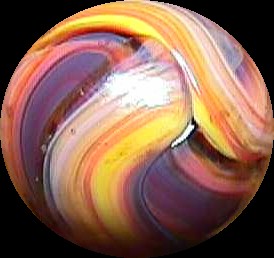 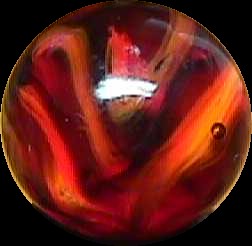 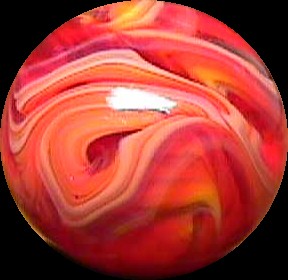 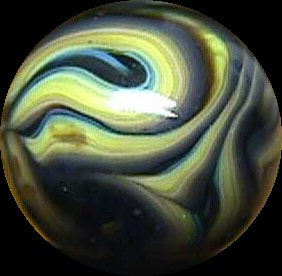 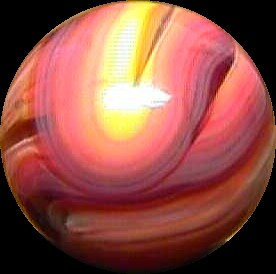 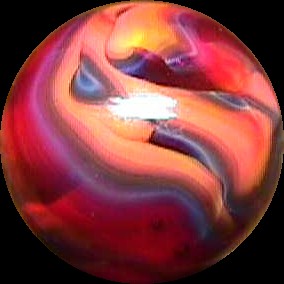 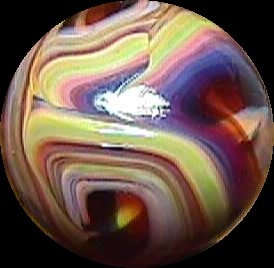 Furnace Swirl
BACK TO MARBLE ALAN HOME
Copyright © 2021    Buymarbles.com
Marble Alan's website is hosted with permission of the A. Basinet family. Any other reproduction is unauthorized.